7 Most Popular Web Frameworks for Development in 2021

There is a diverse range of web development frameworks available in the market. But when it comes to adopting the right framework it seems a complex and tricky task. No worries, I have a suggestion for you. If you are a company owner, then I suggest you choose a framework that will be maintained for the next 5 years at least and fit your company’s goals and resources. If you are a web developer and looking for a job, then choose a high-demand framework in the job market, and fit your profile.

Still, you need my help again to make the choices between, which is the best web development framework for 2021? Alright, I have made a list of the most popular web frameworks in 2021. You can choose your favorite one to make web development hassle-free. You need to make your choice clear before choosing the right frameworks for your website. Because how your website works and looks largely depends on which framework you choose as a developer.

What is a framework in web development?

A framework in web development is a software platform for developing web applications and websites. Web framework has a collection of libraries and modules that support the development process. Developers can create customizable web apps by altering the existing components of a web framework.

The web development frameworks can be used for the development of web services, web APIs, and other web resources.

Why do we need to use web frameworks?

What is the difference between frontend and backend frameworks?

Frontend and backend are two types of development frameworks they are also known as client-side and server-side frameworks. The client-side frameworks are used for dealing with the user interface (UI) while the server-side frameworks work in the background (backend) to ensure the smooth functioning of the website. React, Vue, BootStrap, Ember, and Angular are the example of the frontend frameworks while Django, Ruby On Rails, Express, Spring, ASP.NET Core are the example of backend frameworks. HTML, CSS, JavaScript, JQuery are the front-end languages while Python, JavaScript, PHP, Ruby, .NET are the backend languages.

Now, I am going to describe the top web frameworks of 2021 in the market. I am using some reliable tech sources like StackOverflow and GitHub to verify the source of this information. I hope you enjoy the reading, let’s get started:

React is an open-source front-end javascript library. It’s also known as react.js or ReactJS.  React can also use either JavaScript or Typescript. It has an equally popular design standard framework called Material UI. React framework also relies upon Node.js. If you’re looking for an open-source and lighter-weight web development framework then React is a good choice to go with. Reactjs is one of the top front-end frameworks for 2021 and one of the best web development frameworks moving forward. Remember, React is not a framework, it’s a library for front-end development. However, a lot of web developers do see it as a framework and therefore, we added this to this list. It can be employed on both client-side or the server-side. 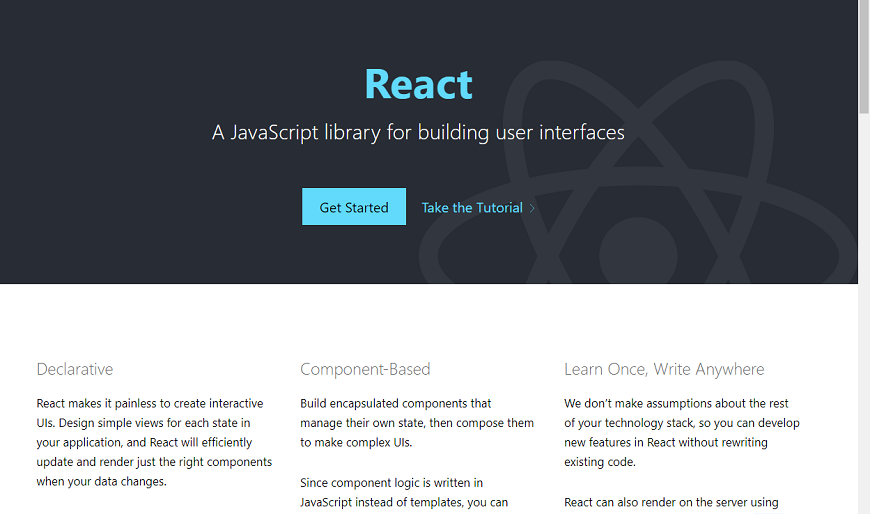 Do you know? React has ranked as the second most used Web Framework just behind jQuery in the StackOverflow developer survey 2020:

React is also loved by the developer community and as a result, it was ranked the second most loved Web Framework in 2020:

Vue.js is the most high-performing JavaScript library of UI components which is very lightweight. Using Vue we can build great dynamic UIs and Single Page Applications within less time. Vue.js provides a lot of components that can assist in developing a seamless UI. An ex-Google Engineer, Evan You is known as the founder of Vue.js. Vue allows you to integrate multiple third-party solutions.

Vue is the combination of AngularJS (View Layer) and React (Virtual DOM) and offered a gracious substitute to both Angular & React. If you would like to amplify applications then you can easily apply this open-source framework. 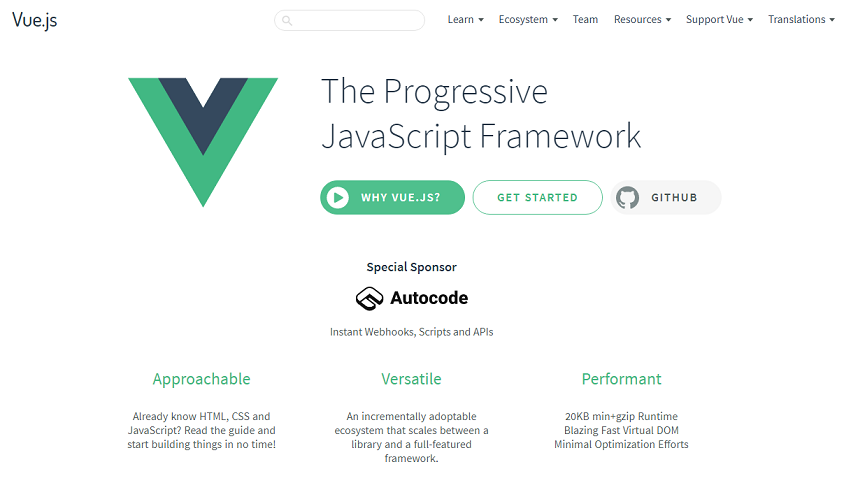 Vue.js is evolving very fast. It is already used extensively in both community and industry. Do you know In Asia, particularly in China, Vue.js is the most used JavaScript-based Web-Framework? As a result, Vue is one of the most popular Client-side frameworks.

In GitHub, it is the most starred Web framework: 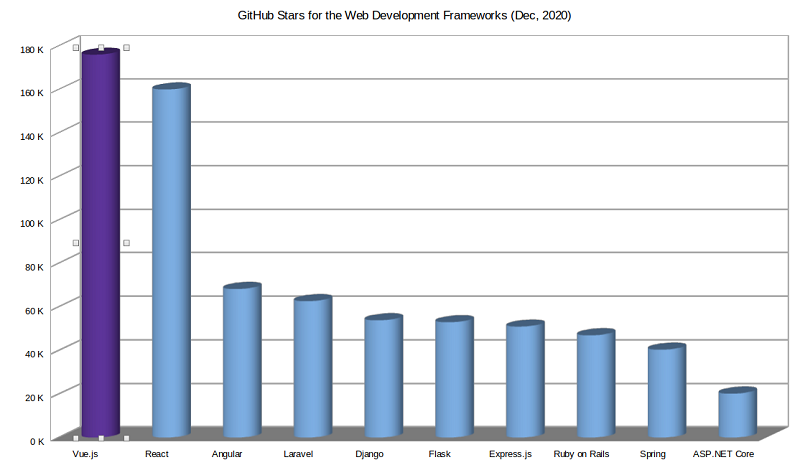 Vue.js ranked as the 7th most popular Web Framework in The StackOverflow Developer survey 2020: 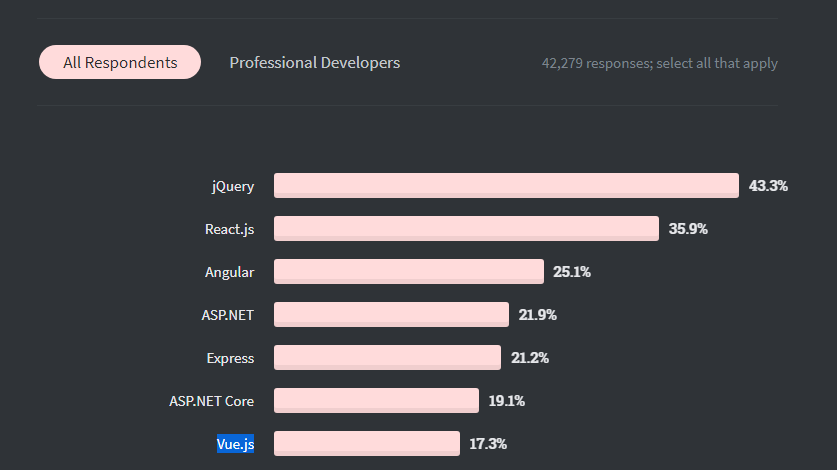 In the same survey Vue.js ranked as the 3rd most popular web framework, just behind React:

Angular is a TypeScript based open-source front-end web development framework. It is a very popular name between the developer’s community and industry.  We can use it to develop vast and high-functioning web apps. Angular highly focuses on robustness and stability, so it is a perfect choice for enterprise application development. PayPal, Netflix, Upwork, Lego, etc. are the name of few websites that are using Angular.

There is also an interesting fact about Angular is that Google releases Angular in 2016 as an end-to-end, client-side MVW web framework after the failure of AngularJS (Angular 1+). 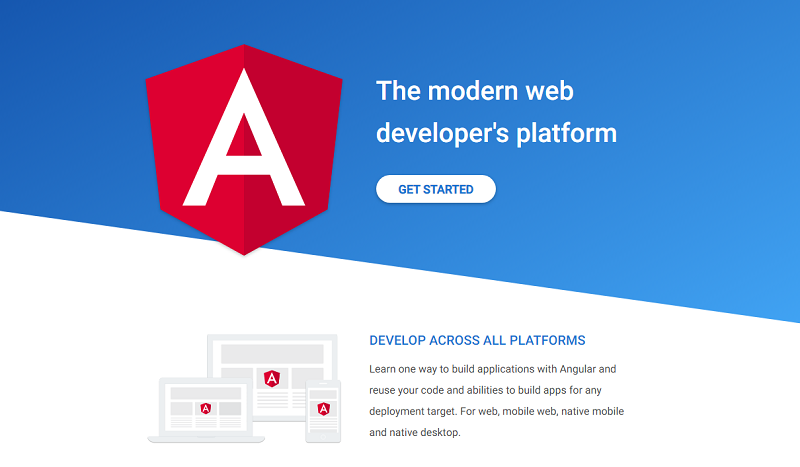 It is fact that Angular has less traction in recent years. But it is a mature and enterprise-grade development framework that is loved by companies. As a result, Angular ranked as one of the most popular web frameworks.

In GitHub, Angular ranked as the third most starred web framework: 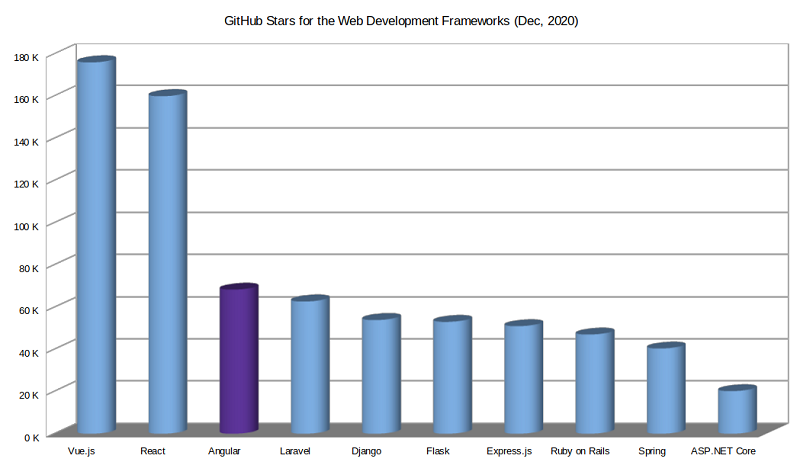 Angular ranked at the third position in the StackOverflow developer survey 2020 just behind jQuery and React: 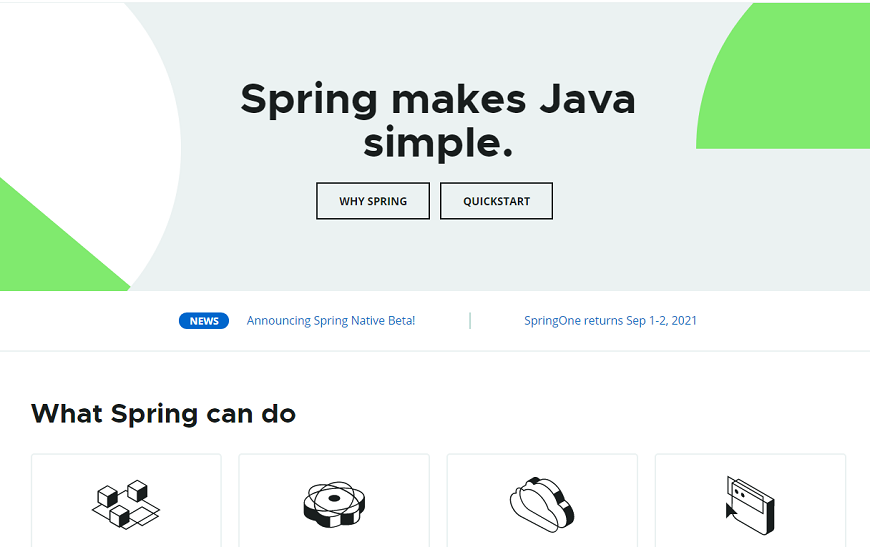 With time, Spring is evolving and playing a big role to make Java relevant in the age of cloud computing. Using the Spring framework, we can create simple, fast, and flexible JVM-based systems and applications.

The Spring is used for creating high-performing and vigorous web applications. It is one of the top backend web frameworks for 2021. Although Spring is not getting the hype it is the number one choice for business software development due to Java.

In the age of React, Vue, and Django, Spring is still a popular framework in GitHub: 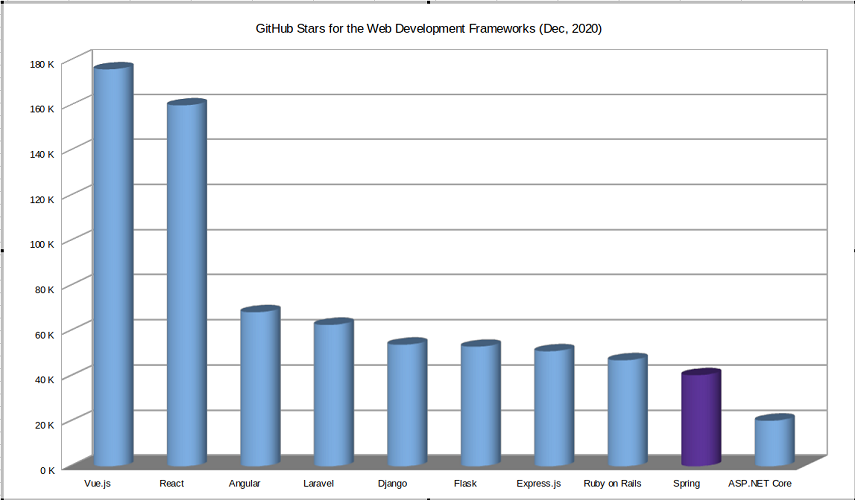 In the StackOverflow developer’s survey 2020 Spring ranked at 8th position: 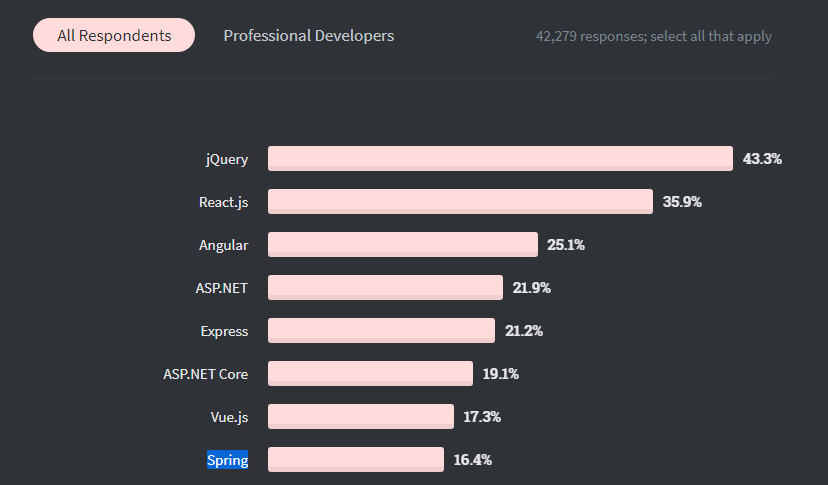 A great achievement for Spring is that it is also a most loved web framework among developers while Java is not considering now a hot programming language.

Django is a free and open-source web framework that is Python-based, developed and maintained by an American independent agency DSF(Django Software Foundation). Django is a server-side framework for the web that follows MTV(Model-Template-Views) architectural pattern.

Django uses CoC and DRY patterns and it is one of the top reliable backend frameworks that help developers to create robust web applications. The other reason behind the high adoption of Django in recent years is the popularity increment of the Python programming language. Applications made using Django are safe and that’s why some popular companies like Pinterest, YouTube, Instagram, and Disqus use the Django framework for development. 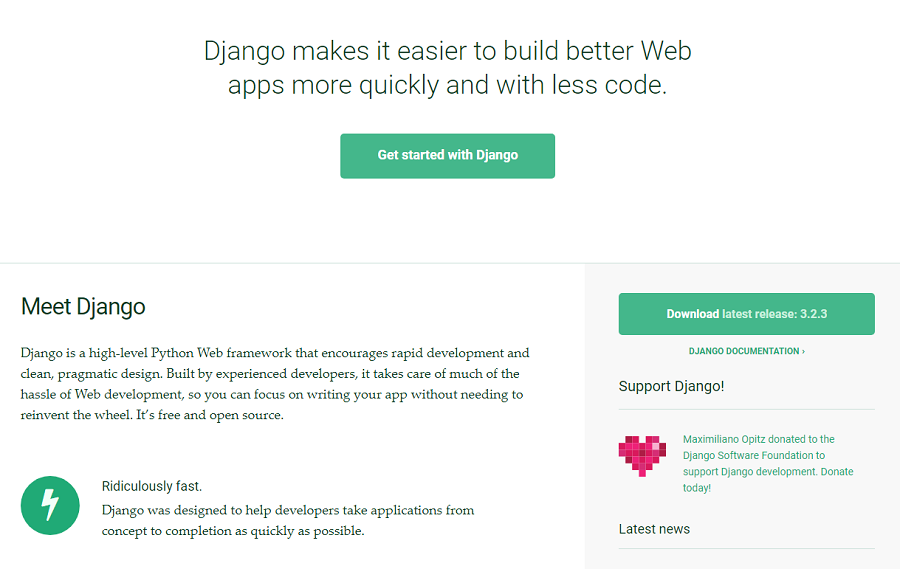 Django is ranked at the second position in GitHub as the most starred server-side framework behind Laravel: 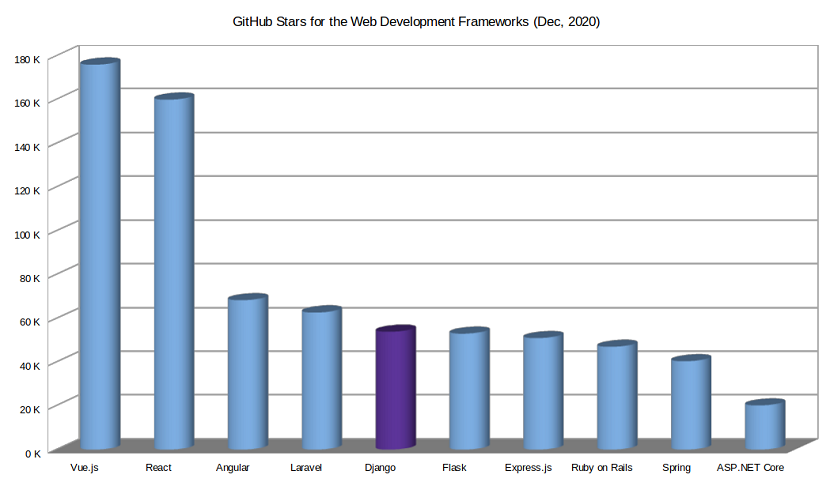 According to the StackOverflow developer survey 2020, Django is one of the most loved web frameworks: 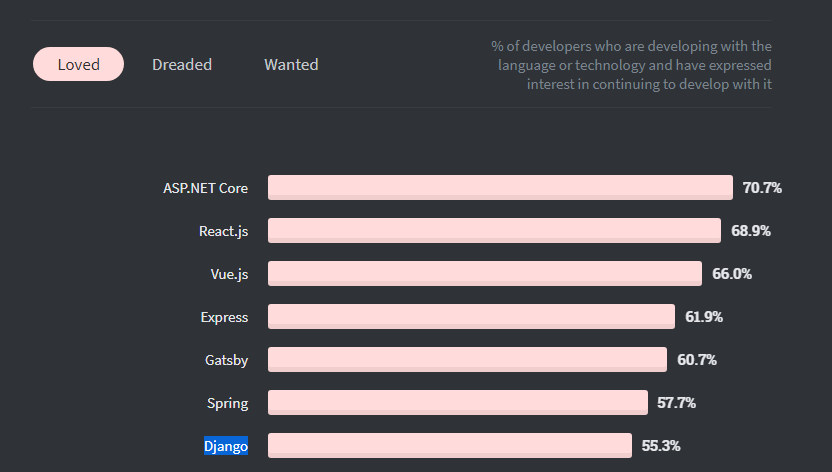 In the early 2000s, when writing a simple “hello world” application needed huge effort, David Heinemeier Hansson created Ruby on Rails.  It is a server-side web development framework that supported MVC patterns and Ruby as a programming language. As a dynamic web application framework, Ruby on Rails perfect for developing a high-speed application.

According to sources, applications developed with Ruby on Rails are generally ten times faster than classic Java frameworks. The features of Ruby on Rails are not the same as other frameworks such as React, Vue, and Angular, so you will find yourself mixing in other things for the front-end development.

While Ruby on Rails is fast to build but it can be slow in performance especially for larger-scale applications. The other point is that it is not optimized for multithreading, so you have to choose it wisely. Twitter, GitHub, Airbnb are the example of some websites that have incorporated Ruby on Rails. 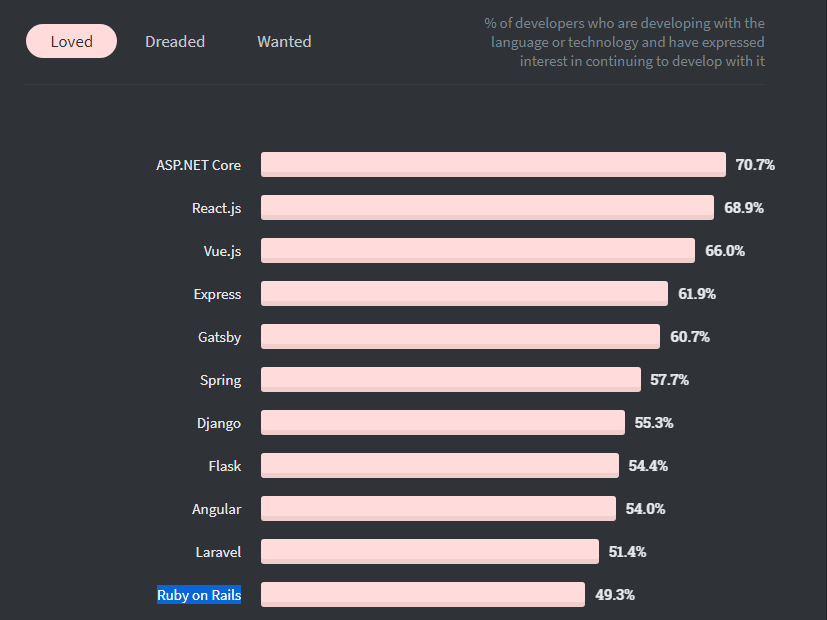 Every developer knows, PHP is an old but very popular programming language for web development. We are talking here about Laravel, which is created by Taylor Otwell in the year 2011 as a PHP-based, server-side web framework. Laravel functions on an MVC architectural model that uses PHP and follows the “Ruby on Rails” philosophy of CoC and many out-of-the-box functionalities that are essential for enterprise web development. 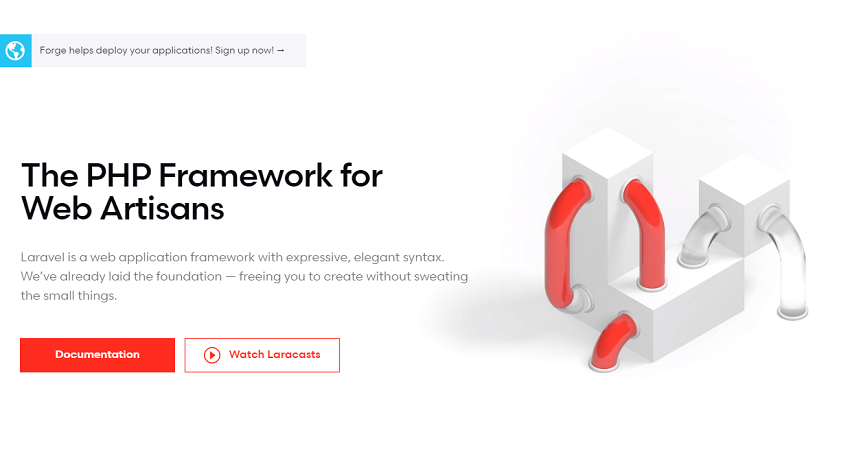 Laravel has API support and contains a good quantity of packages. It includes a lot of features such as dependency injection, server-side rendering, etc. Functionalities such as OAuth2 implementation, subscription billing, zero downtime deployments, app scaling, everything you’d think a modern website should have, are built-in natively with Laravel. 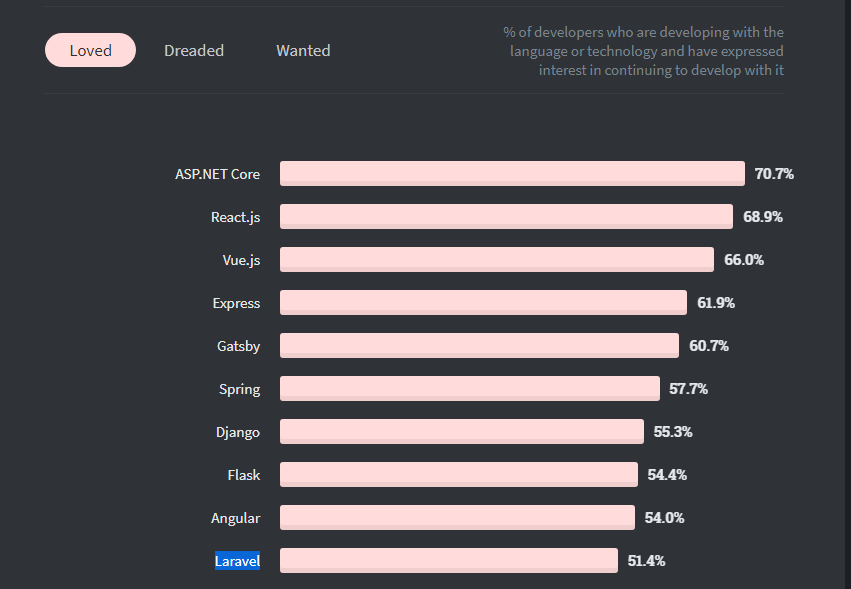 Laravel enjoys high popularity in the development community and it is the most starred GitHub framework among the server-side frameworks: 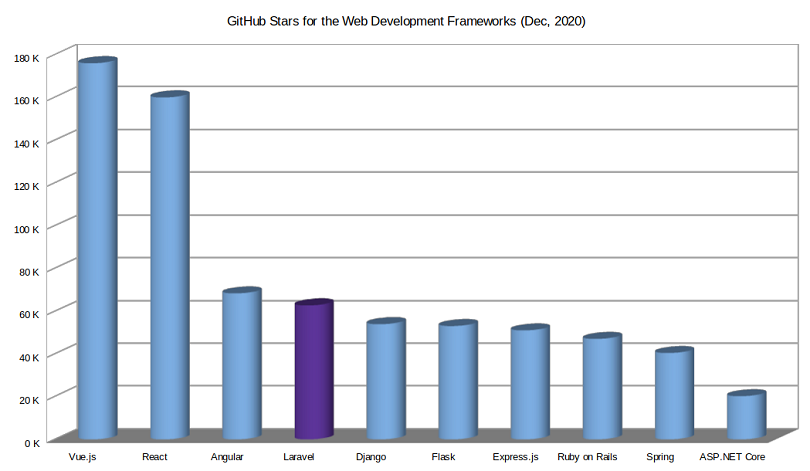 I hope you guys enjoy this article. I have discussed the seven most in-demand web application frameworks here. All of them have their own pros & cons and excel in a particular use case.

In this modern time, SEO is also very critical for many companies. For this purpose, the server-side web frameworks with traditional backend programming languages are a pleasant option. For large and stable web applications, Both JVM-based Spring and .NET based ASP.NET Core are good choices.

I try to include the best available web frameworks here according to 2021. If you wanna work with programming languages like Scala, Go, or Rust then you should better find a framework in that language.

Are you one of them who is looking for a web development company that can create web applications for your business? No worries, AppZoro’s web developers are here to help you with your project. I am sure our developers will provide you the best technology solution for your business requirements. Head up to www.appzoro.com or write us at info@appzoro.com

See What we're up to by subscribing to our newsletter.